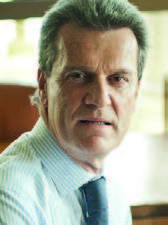 Professor Gilles Dreyfus is a cardiac surgeon at Institut Mutualiste Montsouris in Paris, France. An internationally recognised expert in the correction of mitral and tricuspid valves, he operates on all types of cardiac pathologies.

Professor Dreyfus graduated from Paris University’s Medical School at Paris University, France in 1978. During his medical training, he worked in a number of hospitals across France, and spent six months learning heart transplantation at the University of Stanford, US.

Working alongside Professor Alain Carpentier at Broussais Hospital in Paris, Professor Dreyfus developed a heart transplantation and left ventricular assist device (LVAD) programme, as well as mitral valve repair expertise. In 1989, he became Professor of Cardiovascular Surgery at Paris University. Later, he moved to Foch Hospital in Paris, where he became Chief in 1995.